The Wooby family has been in the hospitality business from 1840-1952 and it all started with a stagecoach stop in Allentown, NJ. They eventually moved to Lyndhurst, NJ where my great grandfather, Peter Wooby, built a restaurant that served as an Inn as well.

The Wooby family has been in the hospitality business from 1840-1952 and it all started with a stagecoach stop in Allentown, NJ. They eventually moved to Lyndhurst, NJ where my great grandfather, Peter Wooby, built a restaurant that served as an Inn as well.  Peter had the idea to build an inn because his friend built a race track and wanted to give people a place to stay when they visited. Peter took advantage of this opportunity and built the Inn on 10 acres next to The Lackawanna Train Station in Lyndhurst, NJ. Eventually the restaurant became Ma Wooby’s Restaurant and was a popular hangout in Northern New Jersey. Frank Sinatra and his group sang there on a regular basis. MaWooby’s restaurant changed names many times over the years from The Standard Hotel to the The Park Rest Inn, Hollywood Bar & Grill and MaWooby’s House of Fun. 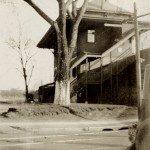 Ma Wooby, Carrie, was a bareback rider, knife thrower, sword swallower and tattoo lady for Buffalo Bill’s Wild West Show. It was there where she met Robert William Wooby, my grandfather. He was the band leader for the Buffalo Bill’s Wild West Show. At the time Robert’s family owned The Park Rest Hotel. My grandparents eventually had four children Leon, Robert, George, and Beatrice who all grew up in the restaurant business. My grandmother was very much like Gypse Rose Lee’s mother.  Three of thier children went to Vaudeville to perform and travel throughout the country.  As my grandmother’s own press would say, “…with great success.”

Congressman Fred Allan Hartley, Jr of the “Taft-Hartlet Act” was a regular customer at MaWooby’s Inn and close friend of my grandmother.  He often went to the restaurant to campaign and spend time with friends.  When I was younger I was in the Presbytarian Boys Club in Kearny, NJ and in our group someone won the Hartley Scholarship.  Five of us were invited to have lunch at Congressman Hartley’s mountain home in New Jersey.  When I was introduced to him, he heard my name and said, “Do you know MaWooby?”

And of course I said, “Yes, that was my grandmother.”

He told me stories of how her restaurant was a hangout for baseball players, politicians, entertainers like Frank Sinatra, and was the place to be in Northern New Jersey. 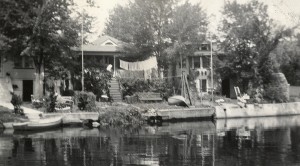 One of the Properties Ma Wooby developed at Indian Lake, NJ 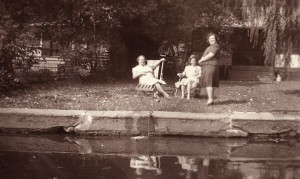 MaWooby was a woman ahead of her time.  She developed several properties in New Jersey at Indian Lake, East Rutherford, Wildwood and Kearny.  According to MaWooby her profit from the jukebox paid for the development of her properties.

All members of the Wooby family were very involved with charity work including the Elks Club, The Rotary Club, Democratic Club, The Lions Club, and George Wooby was active in two of the orphanages in Kearny, NJ.

And for your enjoyment here it is:

Now a couple they seated in a motor car.
They were sweethearts and they didn’t care who knew.
They were holding hands together as the motor loudly roared,
And the price of gas went up to twenty-two, twenty-two!

He was an automobile mechanic and he had studied thru
Out the years, and in terms of his profession, he
whispered in her ear —–

My grandfather wrote lyrics & music. This is one of the pieces where he only wrote the music.  The image on the cover is my grandmother and it was recorded with her singing. One of my grandfather’s most famous pieces is, “I Wrote a Letter to Santa”.

The Wooby family was in Vaudeville.  They traveled all throughout the country and worked in small theaters. Sometimes small movie theaters would have a movie and then bring in a live performance for a short show.

After a while it was down to Beatrice Wooby and a group of girls who traveled state to state performing.  They did very well for over 5 years. I think this paralleled Gypsy Rose Lee’s life in so many ways. From a domineering mother to other disappointments.  I wish I had more stories to tell but my family never really talked about the Vaudeville days.

I added other photographs of the Wooby Family because I think it is such a fascinating family.  I also think the photographs are fun to look at especially the ‘California Here We Come” photos.  I cannot imagine what it must have been like to drive to California with no paved roads. Some of the photographs tell the stories by themselves.  I do have diaries and I hope to someday add them to the website.  It sounds like a movie script to me.