The Collector Art Gallery Restaurant moved from it’s first location on U & 17th St. NW to The Dupont Plaza Hotel in 1992.  I was hoping U St would be our permanent location, but with rent increases we were forced to leave the area. The Dupont Plaza Hotel was looking for more of a restaurant business and the general manager came to me with the suggestion to move.  Eventually the recession hit harder and the hotel changed general managers.  However, The Collector Art Gallery Restaurant was still looking for a new location, and I was very interest in our next move to be to the Dupont Plaza Hotel.  I was able to persuade the new general manager and thats how we changed locations.  The positive side was the great location…location, location, location… right in the heart of the art district (at the time).  Near the Dupont Plaza Hotel there was the Phillips Collection, museums and many other art galleries.   The negative side of the deal is we moved into a union run hotel.  Unions are fine for certain businesses but I would not agree with them in restaurants. I inherited staff that lived off of a salary and did not have a history of working for tips. It took a while to retrain them to become a more professional staff.  I had a waiter who went up to a customer, who happened to be a friend of mine, and the waiter asked how the customer would like their chicken cooked- rare, medium or well done and he has been a waiter for over ten years. The ironic part about our move to the new location is they were looking for a neighborhood restaurant and when I tried to make it that, they would never allow me to do what I wanted.  It was because of this that I was never really happy with the restaurant.  However, having The Collector Art Gallery Restaurant at The Dupont Plaza Hotel was much more profitable than it ever was on U St.   We were at Dupont for 5 years until the hotel was sold.  After the restaurant, I started a 45,000 square foot art gallery at the Washington Design Center and eventually built a non-profit, The Millennium Arts Center in Southwest Washington.

When I took over the restaurant, it was called Stephanies.  It had dark wood paneling with murals on the walls and had the atmosphere of a French Bistro. I brought in dry wall to cover murals and installed track lights. My old customers missed the old location but could appreciate the benefits of the new location.  Some of the benefits of The Dupont Plaza Hotel included access to the metro and underground parking. We had a ceiling full of autographs from our customers on special days and from celebrities as well. The bar with the lounge facing Dupont Circle was a very popular area for people watchers. The restaurant could fit 90 people in the dining room.  We built an outdoor patio where we had out outdoor cafe.  It took way too long to build because of management but came out well and enhanced weather during the warmer months.

One day a valet tried to park a disabled person’s car and as he was driving around the corner, he lost control and came through the window of my cocktail lounge.  No one was injured but one of my regular customers and friend was a few feet away from the incident.  That was a difficult day.

The Celebrities at The Collector Art Gallery Restaurant

Gallery Openings at the Resturant

“Murder at the National Gallery”

When my bartender told me there was a woman who wanted to speak to me, sitting at a table with a man and young lady, I turned around and saw Margret Truman, President Truman’s daughter.  She said she was at the National Gallery of Art doing research for a book she was writing called, “Murder at the National Gallery” and was given a tour.  While she was on the tour, she asked her guide where she could find a restaurant or a bar where artists hangout and if there was someone she could speak to about the Washington Art scene

The person giving the tour responded by saying, “I can answer both questions with one name, Bill Wooby -owner of The Collector Art Gallery Restaurant at the Dupont Plaza Hotel.

We became friends and I helped her find information about the galleries in DC, artists, and new restaurants.  Ms. Truman had a reputation of using real locations of restaurants, hotels, monuments and museums in her books. The “Murder at the National Gallery” was the first book where she used real people and it was in part because I introduced her to artists, museum directors and owners of restaurants in Washington, DC.

We had a book signing party for all the real characters in the book and it was a lot of fun for everyone not use to the spotlight.  We sold over 500 books.  Of course I wish she would have let me murder a cook or waiter in her wonderful murder mystery because that’s every restaurant owner’s dream, but i’m pleased with what she wrote.  Because of the help we gave here, I was in two other of her mystery books, “Murder at the Watergate” and “Murder at the Ford Theater”.

In “Murder at the National Opera” she wrote an acknowledgement, “Special thanks to Bill Wooby whose knowledge of the Washington arts scene has enriched more than one of my Capital Crime novels…”

When president Clinton won the 1992 election, I thought it would be great if all the art galleries in Dupont Circle would have an exhibit of Arkansas artists.  The galleries in Dupont Circle did not want to participate in this so I did it at The Collector Art Gallery Restaurant in the Dupont Plaza Hotel. I contacted all the art galleries in Arkansas to see if they wanted to send their artists to Washington.  Hot Springs, Arkansas jumped at the chance. Gallery owners Carolyn Taylor, Linda Palmer and I organized this art exhibit.  It was the first President Inaugural Art exhibit in Washington, DC. I contacted food and wine companies in Arkansas to donate products from their company for the opening of the art exhibit.  We had ham, blueberry jam, Arkansas wine, Arkansas water, cheeses, smoked turkeys and other delicious items. The exhibit was such a big hit that we sold $23,000 in three days. Senator David and Barbara Pryor were guests of honor at the opening night.

I also thought it would be a good idea to have the First Artists’ Inaugural Ball. A group of artists and myself put together this memorable event on the night of the Inaugural. We sold 1,000 tickets to the Artists’ Inaugural Ball at $15 dollars a piece and the money went to an arts organization. We also had the option for people to donate food to the food bank. We had entertainment every hour, including musicians, jugglers, and performance artists in the lounge or the restaurant and in the ballroom we had dancing. It was one of the most exciting events I have ever put together.

I was honored with this award for organizing the Presidential Inaugural Art Exhibit.

All restaurants love their customers. A large group of the customers at The Collector Art Gallery Restaurant were artists, curators, architects, actors, politicians and pretty much anyone who was involved in a creative profession. We had many different fundraising events and were involved with community on many occasions. Our Customers loved it when I invited them to autograph the ceiling!  We had a ceiling full of autographs from our customers on special days and from celebrities as well.  When a regular customer came in with family or friends from out of town, they would often point to the ceiling to show off their signature.  After, we would invite the friends and family to do the same which really motivated customers to come back.  I would go to the Dollar Tree and buy items such as tacky salt & pepper shakers, stuffed toys and other fun items like tearias to give to customers for their birthdays, anniversaries or for their children.  We always embarrassed our customers on their special days and they loved it!

One of the many fundraisers we had was the Pyramid Atlantic Fundraiser which teaches print making. Many famous artists have used Pyramid Atlantic’s studio. This event was in honor of artist Jim Dine. Because Jim Dine loves to use hearts in his art, we created desserts with heart shaped cookies.  We had 100 people attend the fundraiser and Jim Dine autographed the ceiling.

The Collector Art Gallery Restaurant at Dupont was one of the organizers of the Midwest Library Book Drive with Kathleen Bober. We invited people to bring books to the restaurant and we went out looking for books. We donated over 25,000 books to the library which was destroyed in the Missouri flood of 1993. 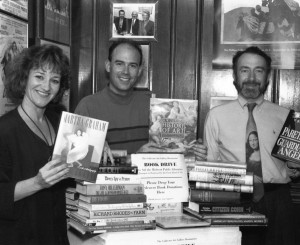 Art on The 7th Floor

Art on The 7th Floor was one of our many outreach exhibits.  It’s my favorite project I’ve put together.  I received a phone call from the manager of the Washington Design Center, Duncan Gilkey and was invited to visit the Washington Design Center in May. Duncan asked me to put an art exhibit in one of their spaces.  I have a reputation for taking over empty spaces and installing temporary art exhibits around Washington, DC.  Little did I know this would be a 45,000 co-op gallery and instead of lasting one month, it lasted 3 and a half years.  They offered me two spaces that were 4,000 & 5,000 square feet on the 7th floor.  It was all office furniture but everyone had moved out.  They left 45,000 square feet of empty space and I said I would take all of it and turn it into an art fair for two months, September & October, which gave me all summer long to pull it together.

I contacted artists and art dealers in the Washington, DC area.  Some of the artists came from the Torpedo Factory. I also invited artists and dealers from NYC and Richmond. We opened in September at the same time the Design Center had their opening of fall fabric and furniture. We sold directly to architects, interior designers and to the public.  We allowed any non-profit to have a fundraiser, lecture, graduation, and we even allowed theater performances at no charge. One special fundraiser we had was for children with Aids in memory of Jeff Bender given by the Bender family. The Washington Design Center loved Art on the 7th Floor so much they wanted me to move to Chicago and create it there.  I decided not to move to Chicago but they went on to create an art fair called Art Chicago which brings in thousands of people every year. This project gave me the confidence to put together a larger project called The Millennium Arts Center. I will always be grateful to Duncan Gilkey,  the tenants at the Washington Design Center and the management of the Merchandise Mart.

Comments have been disabled.